Sports teams use it as motivation. (“Nobody believed in us!”)

It’s been fodder for a million Hollywood movies, from Karate Kid (“Love your car, Mrs. LaRusso!”) to Kung Fu Panda.

If you’ve been around the teaching game for a while, you’ve been told: our kids crave connections. They need relationships. No learning can happen until you connect with your kids. They need to know they belong.

Up here in the Region, we’ve got a little bit of a chip on our shoulder. To the point where we fight over which parts of this area qualify to carry the title “Region”.

We’re not Chicago, even though we border the City of Chicago, in the County of Cook, in the State of Illinois.

And we’re definitely not “Indiana“. Best way to prove you’re not “Region” is to wear a “Colts” anything.

So, we don’t belong.

(We wear that like a badge of honor, by the way.)

For the last 6 years the Indiana Department of Education has put on a series of conferences during June and July known as the “Summer of e-Learning“. My former district, the largest district in Northwest Indiana, and the 11th largest in the state, started thinking it should be able to host one of the 22 conferences last year.

The state had a plan. I’ll paraphrase: You guys are a pretty big district (13,860 students in 2016). Host a conference just for your district. Get your feet wet. Find your keynoters and presenters. Get a facility. Then check back with us. Let us know.

After 370 attendees, nationally-recognized speakers, presenters from within the SCH and beyond descended upon Hammond the Monday after school let out, well, what could the IDOE say?

Fast-forward to the Summer of 2017: We’re in the Big Leagues. (And yeah, I know… “we”? I work in a different district now. Teaching in Hammond is the family business. Old habits are hard to break. Sue me.)

Everybody got something they can use RIGHTNOW.

Alisha Foor and her team put on a whale of a show. Crushed it behind the scenes during 12 months of planning, and knocked it out of the park during two days of awesome learning and sharing experiences.

When I taught in Vegas, my Midwestern-ness stuck out like, well, a flashing neon sign. (“Mr. Dull, why do you wear a sweatshirt and shorts?”) When I taught in the HMD, maybe I was “from there”, but I lived out with the cows and the corn. Now in an exurban district, where everybody’s “from here”, even though I live in the city, I’m still kind of an outsider. I found that out when people here weren’t heartbroken over the Stracks bankruptcy. (Seriously, like I had a tear in my eye when I lined up for lunch today and saw a big tray of Stracks chicken on the table.)

So maybe I don’t belong either.

I’ve been  hanging out online with a group of math teachers that call themselves the MTBoS (Math-Twitter-Blog-o-sphere). I steal all their best teaching ideas, follow them on twitter and at their blogs, and just in general fanboy a tiny bit too much.

@richeisen Your 40 from last year has been immortalized in algebra classrooms nationwide thanks to @ddmeyer http://blog.mrmeyer.com/?p=7606

But what can I say, they changed my outlook and strategy on teaching, and probably saved my career.

(No really, that was my presentation title at South Shore e-Learn).

But really, they’ve got superior firepower from the neck up. Way out of my league. I can use their stuff, but I could never make their stuff.

But this morning, with a donut balanced on my travel mug/water bottle, and my laptop, well, on my lap, settling for in for the keynote, I open twitter and see this in my mentions: 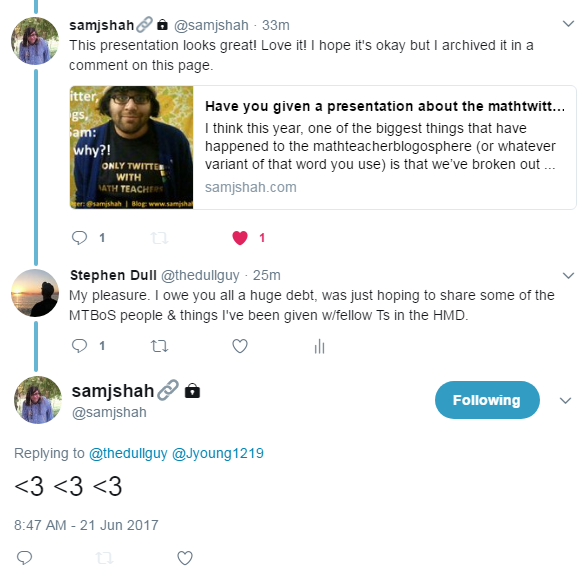 (I had posted this in a twitter chat I occasionally hang out in, in response to a question. The #MTBoS hashtag gave it a signal boost).

Here’s the blog page, with about a million other presos linked there. But for reals, for about 20 seconds there, Sam Shah made me feel like a million bucks. Like…

If you’ve never seen Christine Pinto, she looks like she’s about 12. Weighs 80 pounds soaking wet. She doesn’t have a commanding stage presence. But she is a lowkey powerhouse. If you listen… oh boy. You’ll learn. One of her main points in her preso is:

And guys, that’s the takeaway from today. We belong. Our kids belong. And it’s our job to give them an opportunity to prove it. In Hammond, they walk their talk. Two of the most powerful sessions I attended were led by students. Buddy Berry’s freshman daughter knocked ’em dead with “A Techy Teens Tools For Teachers”.

But my last session of the conference… oh man:

Youngest presenter at South Shore E Learning. She may be small but she packed a punch!! #schk12 #sselearn #presenting pic.twitter.com/JCAaTP77hV

A 3rd-grader taught about 30 of us how to use Animoto to make book trailers. Had a Google Classroom and a slide deck and everything. Yeah.

All of us, on a Tuesday and Wednesday of summer break, when we should have all been laying on a beach somewhere, instead, the Island Of Misfit Toys, we’re all inside an urban high school, learning, together, getting better, for our kids. Kids we won’t see, probably, for like 8 more weeks. Doesn’t matter.