When you drive an old car you get used to some rough sounds.

You also get very attuned to new, strange sounds. To the point where you almost don’t need an engine light to know when something’s not right.

So it is when you teach Algebra 1 frequent fliers, or in my current position, Track 3 Algebra II students with “Junioritis“. As my math coach in a previous district once told a room full of algebra teachers: “Your students have been going to school now for what, 11 or 12 years? Don’t fool yourself. They are not going to instantly start liking math all of a sudden just because you are their teacher this year.” So we started a chapter on exponentials and logs last week. We kicked the whole thing off with a day of graphing exponential functions by making a table of values. How did it go, you ask?

“I didn’t get to the back page because the front page made me cry.”

We go Back to Basics:

Opened up class with the odds of a perfect NCAA bracket, graphs included. Because, the first day of the tournament (mid-day games, yo) dominates my students’ attention like little else.

Then on to the bellringer – a Would You Rather on the evergreen task: would you rather have (insert giant sum of money) for a month’s work, or would you rather get one penny the first day, two pennies the second day, four cents on the third day, and so forth, with the daily pay rate doubling each day.

Several students lowered their shoulder and did the grunt work, either on calculator or on paper. And the answer became crystal clear. They actually “justified their answer with math”. Serious “light bulb” moments. (“Woah!……..”)

Then we walk through graphing an exponential with a fractional base, from the previous day’s assignment. Once I reminded (and showed) them that a negative exponent means write the reciprocal to the positive power, things fell into place. And hey, wait a minute. The shape of that graph looks very familiar. Like, we’ve seen it before. Maybe, today even…

They still freeze up any time they are asked to graph a function from an x-y table, but I think they left class that day having a little clearer view of the *concept* of an exponential function. For just one day, I’ll take it. Let’s just say I’m guardedly optimistic. We’ll do some review at the end of the week, and a partner quiz on the day before Spring Break.

Not willing to rest on my laurels, next we pave the way for Inverse Functions. With a Desmos Activity borrowed from Jonathan Schoolcraft and tricked out with some Iron Giant themes.

Moral of the story: it’s my job to stay in tune with my students’ level of understanding, and back them up when it’s needed. Visuals, a chance to play with numbers, and a chance to manipulate graphs definitely helps.

Or I could sit in a corner and mutter H – E – Double – Hockey Sticks. Those are the options.

That first day of Daylight Savings Time, the afternoon gets away from you in a hurry, ain't it? #tempusfugit #mementomori #SundayAfternoon pic.twitter.com/lm8wOGzS1W

Tempus Fugit. Memento Mori. It’s the fraternal motto of the Knights of Columbus, but it’s probably good advice for all of us.

I was at a fundraising gala this weekend celebrating the 50th anniversary of Opportunity Enterprises, an organization in my area that serves individuals with disabilities, providing job opportunities, housing, and life skills.

The 600 or so of us in attendance viewed the trailer at the gala. We all chuckled nervously as April, one of OE’s clients, reminded us that “50 is, like, old.”, since 50 was approximately the average age of the couples seated at my table. But we got the joke.

I just finished reading “Milestones: Memoirs 1927-1977” by Joseph Cardinal Ratzinger. You may know him as Pope Emeritus Benedict, who famously resigned the papacy in 2013, the first pope to do so in nearly 600 years. He is at once a man of profound holiness and powerful intellect; a prodigious writer and a humble servant. The memoir closes with his consecration as bishop of Munich, a moment which would eventually lead to him being called away from his beloved Germany, to Rome, where he has lived out the remainder of his days. 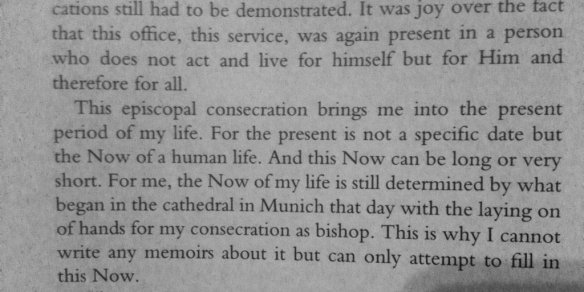 “The present is not a specific date, but The Now of a human life.”

That’s how I feel about teaching. Attempting to fill in the Now. For Father Benedict, that meant leaving behind his life of study and diving fully into a life of service: “a person who does not act and live for himself but for Him and therefore for all.”

That’s what they call it in teaching, right? “Service Time?”

Assuming any of us ever really get to retire.

But there’s work to do. A review for Monday, a quiz Tuesday. Brushing up on some topics I haven’t taught in a while for later in the school year. Moving into our new STEM wing, the first fruits of a $140 million dollar referendum passed in our city. Planning for next year. Building relationships.

And: I can’t write the story yet. Just the next chapter. Starting in the morning.

As St. Bonaventure said:  “To lead a good life a man should always imagine himself at the hour of death.” 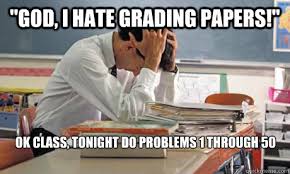 After almost 14 years of teaching, I have come to an unpleasant realization:

As I often tell my kids, “Hate is a very strong word.”

But as I plowed through a pile of Algebra II quizzes (operations with rational expressions, if you must know) this past weekend, some things came into sharp focus.

And we probably learned as much math as we would have if we just closed the books and played rock-paper-scissors all year.

I feel like we’re all putting on an ethereal dance of illusion. A Potemkin village of teaching. I hate it, they  hate it, no learning is going on and it is the source of untold amounts of stress and literally three extra weeks of work a year.

There’s a better way, out there somewhere, right?

I mean, I know there are teachers and classes out there doing incredible things: Desmos stuff and partner quizzes and quiz corrections and standards-based grading and project-based learning and the #MTBoS dumps awesomeness into my brain on the daily. I want it. I want it all. Check that: I want it all, wedged at a 45-degree angle into a (capital-T) traditional school that is about to go 1:1 where students would step over a dead body to get the right grade on a piece of paper.

Seriously cold-blooded (as Gus would say).

Something’s gotta change. I’m not sure what tho. I was a psych minor long ago. I know we as humans only change to move towards pleasure or away from pain. A grade of any kind doesn’t move my kids off the mark. In either direction. It’s gotta be something more.

Am I too old to go change the world? Probably. But to change things in my class? I got enough pain to move. Let’s go.

Hold my beer while I pretend I'm Iron Man pic.twitter.com/8kiNoamb5q