There’s a lot of brain cells being rubbed together in my world right now around the idea of Work-Life Balance. I can’t open up social media without seeing the term “self-care”.

There’s even a whole “40-hour teacher workweek” program out there (for a fee). Believe me, as a guy who just finished grading a stack of 90 Algebra II quizzes and is running the wash machine at 11 pm while setting the coffeemaker for the morning, I get it. It only took me like a week to finish grading that stack. My Monday, Thursday, and Friday are very overscheduled.

I don’t feel real good about myself when I stand in front of my kids and have to say, “Yeah, you know that quiz I gave you last week? Still not graded. I had football, and did Pack-a-Thon Saturday, and it was my birthday this weekend, and, and, and, and….”

I’ve said for years that when I’m elected POTUS, there will be a whole 12 hours inserted into every week in between Sunday night and Monday morning.

If only I had more time…

Here’s the thing tho. There’s never enough time. There’s never enough money. The house is never clean enough. Meanwhile, there’s perfection (so-called) all around. Social media doesn’t help. I don’t even need to get Instagram shamed. Honestly, even the real-life teachers in my building are all better than me.

All this sounds like a recipe to be perpetually miserable.

I’m that guy that has a lot of unformed ideas floating around in my head. Things I know I should be doing, but I need someone to show me the way. Then I get it.

The book is the latest from Jennifer Fulwiler and it details how one woman, her husband, her six kids, and a support cast of thousands made a dream come true.

I’ve been reading Jennifer’s blog for years. She’s brilliant and funny. Her first book is a must-read conversion story.

But wait. I thought you just said she has six kids. When did she have time to write a book? Much less two?

It turns out that life is messy, your house and mine aren’t gonna show up in Sunset magazine or on an HGTV show anytime soon. And God laughs at your plans. So maybe, just do your thing.

The Fulwilers gave up a glamorous power-couple ATX life to move to a house in the suburbs and raise a family. The family got bigger, the house stayed the same size, and Jennifer received an offer from a literary agent to rep her for a book. Hilarity ensues as she attempts to pound out thousands of words a day during her childrens’ nap time while the neighborhood middle-school-girl clique targets her house for Ding-Dong-Ditch and her judgemental hired babysitter recoils in shock at the kids jumping on the couch.

Fortunately her best friend and fellow faithful-Catholic-mom, along with her Texas-tough mother-in-law help her (somehow) survive some of her most challenging moments.

She and her husband plan for how to replace their aging vehicles and keep a roof over the heads of their ever-expanding family, while he pursues a less-pressure-filled career to be active in his role as husband and father.

Hyper-focused, Jen powers down the tracks trying to complete a re-write of her manuscript under deadline pressure when a life-altering health condition forces her hand. 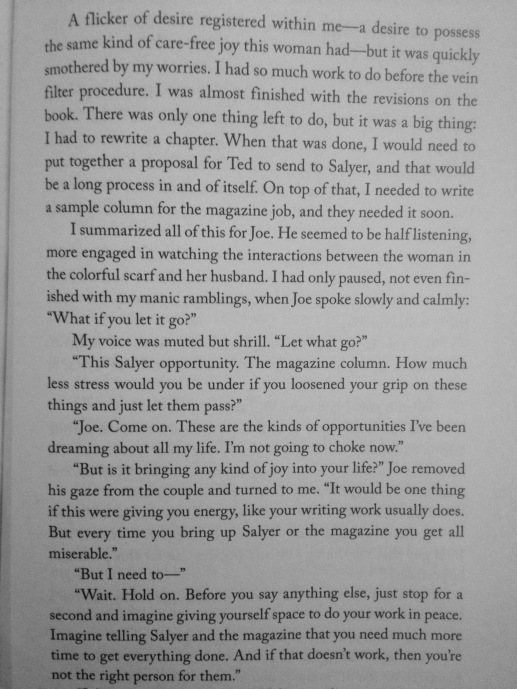 Watching the dream… the thing she had wanted since she was nine years old… evaporate in an instant. It was intense for me as a reader. I felt like I was watching Ray Kinsella try to convince Moonlight Graham to come to Iowa.

Maybe you read this and say, “Wow, that’s easy for Joe to say. It wasn’t his dream he was giving up”. Except…

A Yale-educated lawyer who once could have written his own ticket, he already had made the decision about his career and its proper place in his life, and in his family’s life:

That sounds a lot like the convos I see on my TL regarding teachers with Pinterest-perfect classrooms or who spend 18 hours in a weekend planning a unit. What’s the cost? This year’s #eVillageNWI Day Two keynoter Kim Strobel likes to talk about the “Minimum Effective Dose” – boiling water at 265º isn’t any better than heating it at 212ºF. We all want to give our best, and do our best for our kids. That’s normal. I don’t trust anyone who’s in the teaching game for a paycheck. But: Maybe it’s worth pondering when enough is “enough”. Mrs. Dull is in a sales/recruiting job that routinely has her working 12-hours days. So it’s not just teachers who are looking for balance. It’s literally everybody.

What if “good enough” was good enough? What if once a week I met with some guys at my parish at 6:00 am to have coffee and talk and figure out how to fully live our vocation as husbands, fathers, grandfathers? What if it was OK to carpool with some guys from the neighborhood and get to school at 7:10 instead of 7:00? What if I could leave to carpool back at 3:30? (Unpopular Opinion Alert: Yeah, I know, no good teacher leaves at 3:30. Most days I take stuff home. Turn me in to the EduTwitter police). But it’s forced me to make some hard decisions about how I spend my time.

After conversations with her closest friends and family about her role in this season of life, Fulwiler ruminates over the tension between duty and passion:

“Now I wondered: What if all desires to create – both with children and with work -are, in fact, all pointed in the same direction? What if both are different but complementary ways of getting in touch with the same ultimate Source of creativity? What if following your God-given passion is not just okay to do during the baby years, but actually something that has the potential to enhance your whole family’s life?”

I’m still working on it. I work at a pretty hard-driving school, with parents who expect a Four-Star education for their children, and a department filled with outstanding, relentless teachers. My life for the foreseeable future will be filled with take-home work and weekends and summers built around my job.

Feeding a family is important. But we’ve also got a solid commitment in this house to not miss the things that build a family. So that at the end, I can look up and look back at a life that truly was one beautiful dream.

On Labor Day, a nod to my Region roots: My Dad (40 years at Inland) with some of the guys on his turn, my mom (30 years as a school nurse, almost all in the #schk12), & the two of them chillin' at an Elks or Inland picnic (not sure which) at Wicker Park. #LaborDay2018 #regionkid pic.twitter.com/XyAbWNKqSn

We’ve got kind of a thing for Labor Day around here. Pretty much everybody I knew growing up had family either at one of the Indiana Harbor mills, or at Standard Oil in Whiting. Northwest Indiana steel helped build the Mackinac Bridge, amongst other great structures.

Indiana is the United States’ leading producer of steel and has been for 35 years running. If it were a country, Indiana would rank 10th in the world in steel production. Half the blast furnaces in the country are in Lake and Porter counties:

“The Hoosier state has more than 20,000 steelworkers and nearly a quarter of all the steelmaking capacity in the United States. Half the blast furnaces in the country are located in Lake and Porter counties, which boast a wealth of steelmaking assets.

Moving to Vegas was a rude awakening for me. Everything was “style over substance” there. Here, what you see is what you get. Pick up your hard hat and lunchbucket and go to work. I stood out like a sore thumb out there. I was told my first year of teaching that I was a bit of a workaholic, and all these years later I still won’t leave the building on Friday until I’m set up for Monday. That’s what was modeled for me as a kid. We didn’t call it that, but that blue-collar work ethic was just the culture growing up, and old habits die hard.

As adults, we have an opportunity (and an obligation) to build the culture in our schools, and our organizations. In particular, those of us who work in schools need to help our kids develop the habits that will serve them well as adults.

My youngest son is playing freshman football this year. He played Pop Warner as a 5-year-old but soon outgrew the height/weight matrix, so it’s his first time back in pads in 9 years. Meanwhile some of his teammates have been playing virtually their whole lives. It’s tough for a rookie to crack a lineup of experienced athletes.

He understands his role on the team, and has been working hard to improve. To me, the biggest benefit has been two-fold: he’s learned how to be part of a team, and he understands the commitment that is required to play a school sport. In for a penny, in for a pound.

Our new varsity head coach addressed the parents at an informational meeting last May. Among other things, he told us he had instituted a players’ leadership council, a group that would have input into the program, with those players being selected by their teammates.

Now it’s one thing to say “my players are going to lead”, and completely another for them to embrace that role.

So, here’s a thing I wrote this week: 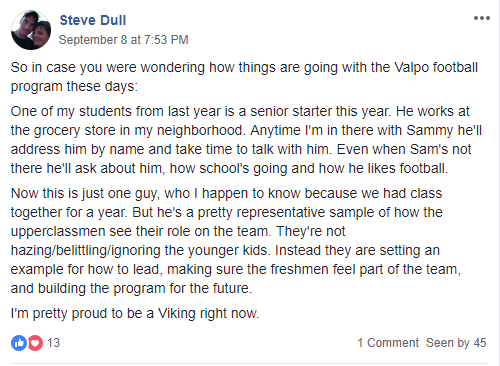 That’s not nothing. If you want to build a program, you have to keep the pipeline filled. You can treat them like crap, not care if they quit, or, you can show them what it means to be a varsity athlete, wearing the uniform of a school that opened 16 years after the end of the Civil War. That guy has nothing to gain from how he treats the freshmen players. It’s not like they’re gonna take his starting job. Which makes it genuine.

And pretty damn important. The qualities and beliefs and actions we want passed down, we have to be intentional about. They have to infuse our world. Pick up your rosary, go to church, hit your knees. Take care of your business. Love your wife and kids. Pick up your hard hat and go to work.

It’s not gonna happen by waving a magic wand. If we want our kids to do it, we have to live it. Period.

And it’s hard work. It’s a labor of love.